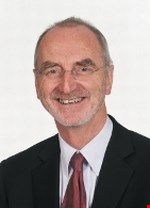 Prof Ian A Sutherland was educated at Rugby School and Bristol University. He graduated in Mechanical Engineering in 1967 and after a graduate apprenticeship in the machine tool industry, he returned to Bristol to do a PhD in machine tool technology. He then joined NASA as a National Academy of Sciences postdoctoral research fellow at the George C Marshall Space Flight Center, Huntsville Alabama before returning to the UK to join the MRC’s National Institute for Medical Research as a member of their scientific staff and head of Mechanical Engineering. In 1989 he moved to Brunel University’s Institute for Bioengineering, where he became director in 1995. Prof Sutherland has had a long and distinguished research and development career in Biomedical Engineering. He has always worked as an engineer and scientist in a multi-disciplinary, collaborative environment at the forefront of a number of disciplines - notably portable insulin infusers, the treatment of infertility, the study of pelvic blood flow, the management of incontinence and the development of space flight hardware for NASA. The majority of these collaborations have resulted in commercial hardware and all have contributed to improved quality of life for the beneficiaries, albeit one being extra-terrestrial. He recently set up the Advanced Bioprocessing Centre at Brunel where he and his team are developing new methods of purifying drugs and getting them to market quickly in close collaboration with the pharmaceutical industry. The success of Prof Sutherland’s research led to him being invited to give the 2004 IMechE James Clayton Lecture, being awarded a visiting professorship at Sichan University in China and receiving with his team at Brunel Institute for Bioengineering the Corac award for Engineering Research with Enterprise Promise. Prof Sutherland is invited to give keynote lectures on his research world wide (approximately 12 a year) and is currently on the IMechE Pharmaceutical Committee, an Executive Council Member of the Consortium for the Globalisation of Chinese Medicine (CGCM) and on the international organising committees of CCC2010 and BPP2011.