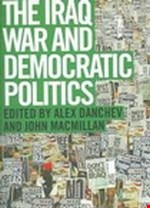 I am interested in history and theory of both the particular peace-proneness and the use of force by liberal states (democracies). Initially the focus of this interest was on the Democratic Peace proposition but more recently the focus has been more on liberal state intervention.

I am presently working on an article on historical variation in practices of intervention and a book provisionally entitled ‘Democracy and War’.

I was Principal Investigator for an ESRC funded seminar series – Rethinking Intervention – 2009-2011 which culminated in a special issue of the Review of International Studies titled ‘Intervention and the Ordering of the Modern World’ (39: 5), December 2013.