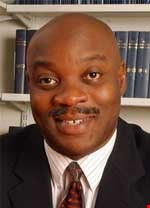 Abimbola Olowofoyeku joined Brunel University London as Professor of Law in July 2000. He is a barrister and solicitor of the Supreme Court of Nigeria, and an Associate of the Chartered Institute of Taxation of Nigeria.

Prof Olowofoyeku is the current Head of the Division of Public and International Law.