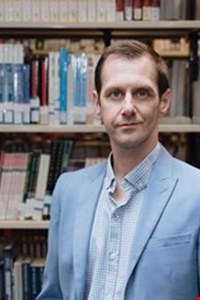 I joined Brunel in 2013 and co-founded the musical theatre subject strand and degree pathway courses. I have served as Programme Lead, Admissions Tutor and am currently the Associate Dean (Student Experience) for the College of Business, Arts and Social Sciences.

I publish work on a range of subjects including British alternative theatre histories, performance and politics, musical theatre, gender and sexuality, pedagogy and student experience, and historical research methodologies. I have reviewed manuscripts for Routledge, Methuen Drama (Bloomsbury), and others.

I hold experience as a performer in theatre, musical theatre, television, and commercials, having worked in venues across Los Angeles and Southern California. For my performance in the West Coast premiere of Johnny Got His Gun in 2003, I received the Backstage Garland Award for Best Actor, and the production was nominated for Best Revival by LA Drama Critics Circle and LA Weekly. I trained at the Orange County School of the Arts and in the inaugural cohort of the Ray Bolger Musical Theatre Program at the University of California, Los Angeles (UCLA). I wrote theatre reviews in New York briefly for a year and following a rare stage IV cancer diagnosis and subsequent treatments from 2006-2009 I transitioned my work primarily towards education.

I teach across many of the Brunel Theatre undergraduate modules and am a supervisor for PhD postgraduate work. I taught previously as a visiting lecturer at Royal Holloway, University of London, Bath Spa University, and University of Winchester.

PhD in Drama and Theatre (Royal Holloway, University of London)

Associate Dean (Student Experience) for the College of Business, Arts and Social Sciences