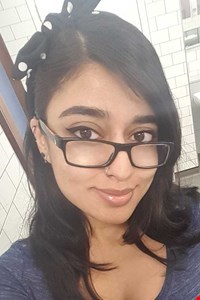 Jaspreet has been studying for her PhD in the department of Sociology and Communications on a part-time basis since November 2017. She was recently awarded a prestigious techne AHRC scholarship to fund her studies. Through an analysis of the U.S. women's prison drama, Orange is the New Black (2013-), her PhD aims to further understanding of the global Prison Industrial Complex by synthesising ideas around narrative with feminist theories of embodiment.

In March 2019, Jaspreet had an article published in The Journal of Men's Studies (adapted from her master's dissertation), which examines portrayals of hegemonic masculinity in the U.S. television programmes Sons of Anarchy (2008-2014) and Ray Donovan (2013-). She also currently teaches on the level 1 BSc Sociology Module, 'Becoming a Critical Scholar.'