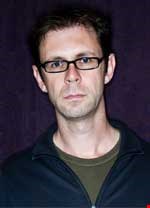 John Croft (b. 1971) studied philosophy and music at the Victoria University of Wellington, and composition and music cognition at the University of Sheffield. He has a PhD from the University of Manchester, where he studied with John Casken. His music has been played by many ensembles and soloists, including the BBC Philharmonic, the London Sinfonietta, the Arditti String Quartet, Ensemble Exposé, Studiya Novoi Muzyki, Distractfold Ensemble, 175 East, Stroma, Marij van Gorkom, Philip Thomas, Matthew Barley, Richard Craig, Barbara Lüneburg, and Xenia Pestova. He  received First Prize in the 2001 Jurgenson International Composers\' Competition for his String Quartet and the the 2011 ICMA European Regional Award for ...ne l\'aura che trema for alto flute and live electronics. His Intermedio III for bass clarinet and live electronics won the Prix Ton Bruynèl 2012. His opera-monodrama Malédictions d’une furiewas recently premiered at the Sounds New Festival, with Lore Lixenberg as the Fury. He also teaches and writes on the philosophy of music.