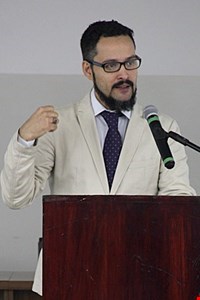 Marcus V. A. B. de Matos is a Lecturer in the Division of Public and International Law since July 2021.

Dr De Matos holds a PhD in Law from Birkbeck, University of London, fully funded by a CAPES Foundation Overseas Scholarship (0999-12-1), a MRes in Human Rights and a Bachelor’s degree in Law from the Federal University of Rio de Janeiro (UFRJ). He is an Honorary Member at the Institute of Brazilian Lawyers (IAB), and currently a Guest Lecturer at the State Attorney’s Office (PGE/RJ) Professional Postgraduate School, where he teaches Legal Theory classes in the Public Law Programme. Before joining Brunel he was a Postdoctoral Fellow at the National School of Law in the Federal University of Rio de Janeiro (UFRJ), funded by the Brazilian National Council of Research (CNPq). Previously he was Director of Teaching Programmes at the Judicial School in the High Labour Courts in Rio de Janeiro (TRT/RJ); Advisor to the State Secretariat for Human Rights in Rio de Janeiro (SEASDH); Visiting Researcher at the Institute for Social Sciences (ICS) in the University of Lisbon; Associate Tutor at Birkbeck College; and Part-time teacher at the London School of Economics (LSE).

His research interests broadly revolve around Public Law & Legal Theory, Law & Humanities and Human Rights & Public Policy. His research offers an innovative approach of the notion of sovereignty, moving beyond the indeterminacy and agonism of legal and state forms to demonstrate the limits and the links between modern law and the aesthetic construction of the subject. He has lately been engaged in two research projects: an investigation on human rights & religion, a memory and truth project focusing on Christian leaders who were arrested and persecuted during the Brazilian Military Dictatorship (1964-1985), and currently funded by the Institute of Communities and Societies; and "Living Avatars," an interdisciplinary project studing digital avatars and currently funded by the Brunel Research Interdisciplinary Lab (BRIL).

He has been awarded an Honourable Mention by José Bonifácio Academic Foundation (FUJB) and has been the recipient of several grants by academic and government funding bodies such as the Birkbeck Institute for the Humanities, the Brazilian Ministry of Education, the Brazilian Ministry of Science and Technology, the National Secretariat of Human Rights (SDH), and the Harvard Institute for Global Law and Policy (IGLP). Dr De Matos has worked as a researcher and consultant proving academic and legal advice to third sector organisations such as the Institute for the Study of Religion (ISER), World Vision, Tearfund, and Rede FALE. He currently collaborates with Peace and Hope Brazil and is a founding member of RECAP - a popular legal network that freely provides legal & advocacy support for individuals and organizations on pressing human rights cases in Brazil.

He tweets in Portuguese and English from @mvdematos.