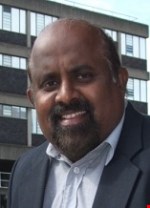 Dr Manivannan is currently a Lecturer for electronics, computer languages and embedded systems in the Design Department at Brunel University. He is the module leader for two Design undergratuate modules and the chair of department panel. Dr Manivannan is currently a senate appointed panel member for  the University desiplinary panel  and served as an elected senate member for researchers for 2016/17 academic year.

Dr Manivannan received his doctorate degree (DPhil) from University of Oxford in the field of  optical pattern recognition in 1997 and his bachelor's degree {BEng (Hons)} with a first class Hons in electrical and electronic engineering from City University, London, UK in 1994.  He then worked for Motorola, Symbian Ltd and Open Trade Technologies Ltd; mainly in Computer Modelling/ Software development for scientific applications.   He then spent some good time in teaching electronics and maths at further education colleges at undergraduate level in UK before joining Brunel University as a researcher in 2009.

Dr Manivannan has attended many international conferences, chaired sessions and delivered keynote address.  His work has received many best paper awards.  He has published more than sixty journal and conference papers over the last eight years, including one invited article and published four book chapters.  Dr Manivannan was the pioneer and an investigator  of an Innovate UK R & D project worth of £1.2 million spanned across 2015 to 2016. He has also sucessfully secured a number of internal and external (EPSRC) funding recently.

Dr Manivannan is a senior member of IEEE, senior member of APCBEES and member of Electrostatics Society of America, USA, Oxford Engineering Society, and member of Oxford university alumni. He is also technical committee member of ICEEA 2013 to 2016. Dr Manivannan is the treasure of IOP Dielectrics and Electrostatics (D&E) Group sicne July 2017 and the Program Chair of an IOP international conference, "Electroststics 2019".  He has been a reviewer of many internationally reputed journal such as  OSA Applied optics, IEEE transaction of Industrial Applications and SPIE Optical Engineering