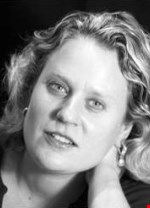 Sarah Penny teaches Creative Writing at both undergraduate and post-graduate level. She is module co-ordinator for both Special Project and Minor Project (the independent writing projects for final year undergraduates) and welcomes PhD applications that reflect her particular research interests.

Current Work: The Bundu Bashers – a children’s wildlife series (2011) The Lies We Shared – a murder-mystery set in Zimbabwe during the Mugabe land appropriations and Kenya during the multiparty elections (Penguin South Africa, 2002) The Whiteness Of Bones – an autobiographical travel narrative about a journey through East and Central Africa (Penguin South Africa, 2002) The Beneficiaries – the story of a young woman who grows up in a rural boarding school during apartheid set against the backdrop of the Truth and Reconciliation Commission (Penguin South Africa, 1997)   SHORT STORIES AND ANTHOLOGY CONTRIBUTIONS I Am A Transnational (included in Should I Stay Or Should I Go – published by Two Dogs, 2010)       Waiting (included in 180 Degrees: New Fiction by South African women writers (Oshun Books, 2005)   Casualties (included in Scores, 1999)