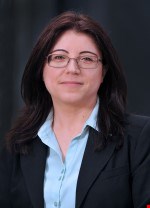 She is also interested in combining physics with computer science in other innovative ways, investigating physics-inspired computer algorithms. Her guest lecture at 2019 CERN School of Computing is an introduction to this topic.

Liliana is also a member of the CMS collaboration which runs the high-energy particle physics experiment Compact Muon Solenoid (CMS) at CERN (European Laboratory for Participle Physics), Switzerland. She has contributions to the R&D and construction of the microstrip silicon sensor particle tracking system, to the early multivariate statistics analysis (machine learning) methodologies (having been member of the CMS Statistics Committee), and to the data analysis of the experiment. She was also Brunel University CMS Deputy Group Leader. She co-authored the discovery of the Higgs boson with the CMS Collaboration, discovery which provided the experimental basis for the Nobel Prize in Physics in 2013.

She was member of the Babar collaboration which run the medium-energy particle-physics experiment with the same name at Stanford Linear Accelerator Centre (SLAC), USA, where she contributed to the operation of the experiment (having been Deputy Run Coordinator) and to the data analysis. She co-authored the CP (Charge Parity) violation measurements with Babar Collaboration which provided the experimental basis for the Nobel Prize in Physics in 2008.

Her PhD studies were on the electroproduction of kaons and baryons at medium energies at Thomas Jefferson National Accelerator Facility (Jefferson Lab), USA. She performed the first measurement of the polarisation of the Lambda particle produced in an electroproduction reaction.

Principal Investigator of an EPSRC grant on machine learning in value £315k;

Co-Investigator of STFC research and doctoral training grants for particle physics in value of over £3m;

Grants and sponsorships for organising the 33rd CERN School of Computing at Brunel University;

Grants and sponsorships for organising the 14th International Workshop of Advanced Computing and Analysis Techniques (ACAT) at Brunel University;