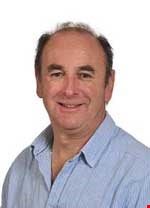 My research began in the 1970s in palaeontology and diversified into sedimentology and environmental geosciences, with a wide base of subdisciplines. Current research focus is on:

1992: Chartered Geologist of the Geological Society of London

Al-Maslamani, Mohammed: Thesis title: Assessment of atmospheric emissions due to anthropogenic activities In The State Of Qatar. PhD accepted, to be awarded 2009. First supervisor. Funded by Qatar State funding.