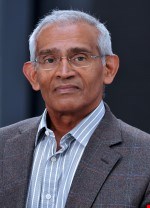 Professor Balachandran is a Fellow of IEEE (USA), IEE (UK), InstPhy (UK), InstMC (UK) and Royal Society of Arts (UK). His research interest spans several different disciplines: Electrostatics & Charge Particle Dynamics, Electrohydrodynamics, Micro/Nano particles and fibre generation, Transport of DNA using DEP force, Lab-on-a-chip, Electromagnetic Field Sensing, EM Interaction with Human Body, Dynamic Measurement Systems, Global Positioning Satellite System for Navigation and Medical Electronics. He has actively pursued research in these fields for more than 20 years and published over 200 papers to date and filed 10 patent applications. He has served as an External Examiner for 23 PhD degrees in the UK, France and Australia. Professor Balachandran has presented more than 40 plenary and invited talks in his field of expertise at international conferences around the globe. He has organized and Chaired several international conferences and continue to serve as a member of several scientific and organizing committees of international conferences. He is regularly invited to Chair sessions at IEEE/IAS, ICLASS, and several other meetings in the UK, Europe, USA and Asia. On a couple of occasions, Prof. Balachandran’s research has been featured on BBC World Service and TV Broadcasts. He continues to review manuscripts for 15 archival journals and research grant applications for EPSRC (UK), EU Framework, NSF (USA), SERC (Canada) and Singapore government.

Prof. Balachandran is a member of the Editorial Board of the Journal of Atomization and Sprays, and the International Journal of Particle Science and Technology. He is a paper review manager of IEEE Transactions of Industrial Application Society. He has been a Guest Editor for the Journal of Measurement & Control. He has served as a member of Brunel University London Court, Council, Senate, Finance Committee, Appeals Panel, Faculty Board and Wolfson Centre Advisory Board. He has a long experience of acting as a consultant in the fields of his research to over 30 companies worldwide.