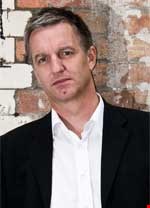 Christopher Fox is a composer, teacher and writer on new music and since 2006 has been professor of music at Brunel University London. His work has been performed and broadcast world-wide and has featured in many of the leading new music festivals, from the Amsterdam PROMS to the BBC Promenade Concerts and from St Petersburg to Sidney. He has established particularly close relationships with a number of ensembles with whom he regularly works, including Apartment House, EXAUDI and The Clerks in the UK, the Ives Ensemble in the Netherlands, and KNM Berlin in Germany. Fox’s music is widely available on CD, with six portrait CDs on the Metier label, a portrait CD on the NMC label, and other recordings on Artifact, BVHaast, FMR, HatHut, Metier and NMC.   Fox has been hailed by The Wire as \"a tantalising figure in British Music\" and the Sunday Times has described his music as \"impressive, thoughtful, entertaining and extremely varied\". His work regularly extends beyond the conventional boundaries of the concert hall and includes a number of extended ensemble works which defy categorisation.