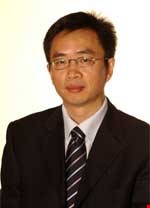 Dr QingPing Yang is the Director of the Brunel Quality Engineering and Smart Technology (QUEST) Research Centre/Theme, Brunel Digital Hub, which was launched from the Brunel IQMASS (Innovative Quality, Measurement and Smart Systems) Research Group he founded in early 2013, based upon more than 30 years dedicated research and teaching.

Dr Yang joined the Brunel Centre for Manufacturing Metrology (BCMM) in 1988 with a visiting scholarship awarded by the AVIC, after his graduation in Instrumentation and Measurement Technology from Chengdu Aeronautical Polytechnic in 1983 and subsequent 4 years’ research experience at an Aircraft Structure Research Institute (AVIC, Xi’an) and admission to an MSc Programme in Robot Control and Intelligent Control at Northwestern Polytechnical University.  In 1989, he was awarded an ORS Award and a PhD Studentship from British Technology Group to develop a patented smart 3D high precision probe system for CMMs, and he received his PhD degree in October 1992.

Since then he has been working as a Research Fellow, Lecturer/Senior Lecturer/Reader (Associate Professor) at Brunel University London.  He has actively participated in 14 (10 as Principal Investigator) research projects funded by the UK government, EU and industrial companies, with a total funding of about £2.356 million as Principal Investigator and £888K as Co-Investigator).  Through more than 30 years dedicated research, he has developed a unique and coherent research field broadly integrating three research areas of sensor/measurement systems, quality engineering and smart systems with rigorous theoretical foundation, addressing the core science and technology of Industrie 4.0.  He has published more than 100 journal/conference papers, 5 book chapters and 3 patents (one patent successfully assigned for commercial exploitation in 2004) in these areas. He has supervised (as the 1st supervisor) 18 PhD and 3 MPhil students as well as 9 visiting academic staff / PhD students, and he is currently supervising 3 postdoctoral Research Fellows and 8 PhD students.