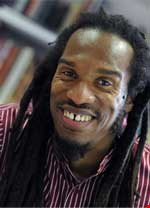 Professor Benjamin Zephaniah was one of the pioneers of the performance poetry ‘scene’ in Britain. He was part of the ‘school’ known as the ‘Dub Poets’, these were poets that work alongside reggae music. He has spent most of his life performing around the world in schools, universities, concert halls, and in public spaces.

His poetry is noted for mixing serious issues with humour, and being accessible to a wide range of people. He is able to perform in children’s nurseries or political rallies, and his strongest area of interest is looking at how poetry works in performance and its relationship to music.

He has also written novels for young adults, and plays for radio and stage. Although his music is rooted in reggae, his recordings now have many influences including, Jazz, Hip Hop, and Dubstep. He contributes to many radio programmes and has presented documentaries on radio and television concerning literature, culture, race and politics.

His recent releases include a music album called Revolutionary Minds, and his autobigrahpy, The Life and Rhymes of Benjamin Zephaniah, which was sortlisted for both the National Book Awards and the Costa Book Award.

Zephaniah, B. (2015) 'What the English could learn from the Eisteddfod.'. BBC Wales Web SIte.