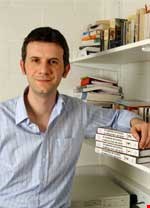 Prof. Watkin’s research is well-established and wide-ranging. He began his career working on contemporary poetics and literary theory. He has since changed emphasis and is now one of the world’s leading specialists on contemporary continental philosophy. He has written two books on Agamben and two books on Badiou as well. Of late he has also extended his horizons working on more political issues cohering around the topics of violence and biopolitics. This has led to numerous pieces of journalism on issues pertaining to capital punishment, surveillance, terrorism, war and technology. He is currently working on a book-length study of what he calls Bio-Violence.