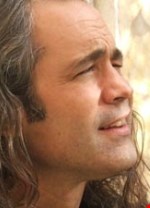 Dr Carl Faia studied composition at the University of California at Santa Barbara with Peter Racine Fricker and Edward Applebaum, and the Royal Academy of Music in Denmark, on a Fulbright grant, with Karl Aage Rasmussen and Per Norgaard.

Since 1995 he has been active as a live electronics designer and composer working at IRCAM in Paris, the CIRM in Nice then as a freelance artist. He has collaborated with numerous composers and artists to present new works with computer electronics in festivals throughout Europe and works regularly with Art Zoyd Studios in France.