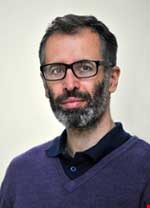 Dr Yohai Hakak joined Brunel in September 2014 as a lecturer in social work. His practice experience as a social worker is in mental health where he worked with long-term service users. Yohai’s research interests are in the sociology of risk-perception, youth, religion, parenting, gender and mental health and the connection of these areas with social work. Yohai's last manuscript titled Haredi Masculinities between the Yeshiva, the Army, Work and Politics: The Sage, the Warrior and the Entrepreneur was an ethnographic study of Jewish Haredi (Ultra-Orthodox) young men in Israel. It was published by Brill in 2016. The outcomes of Yohai’s academic work included also several award-winning documentary films.

Yohai is interested in supervising students in the following areas and in relation to social work: