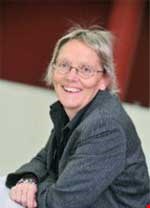 Christina joined Brunel in October 2009. She is  Professor of Gerontology and Public Health and Vice Dean (Research) in the  College of Health and Life Sciences as well as the Ageing Studues Theme Leader in the Institute of Environment, Health and Societies.

Christina started her academic career as a geographer with a particular interest in the spatial distribution of health and illness and access to, and provision of, health and social care. She has a BA in Geography from Swansea University and an M Phil in medical geography from Nottingham.  It was whilst working at the Medical School in Cardiff that she developed  her interests in gerontology and her PhD investigated outcome after discharge for older people in Wales and she now focuses her interests in public health/population medicine on to the experiences of old age and later life.

Christina’s initial research interests were focussed upon  health and health inequalities and the evaluation of services for older people.   More recently she developed a keen interest in loneliness and isolation; the benefits of exercise and activity in later life and the experiences of old age and later life amongst minority communities and the experience of ageing for people with intellectual disabilities. She has received funding for her research from a range of funders including ESRC, NIHR, Dunhill Medical Trust, Leverhulme and the British Academy.

Christina has written over  200 journal articles and book chapters and has published 8 books in the field of gerontology. Her most recent book, Ageing, Health and Care, was launched by Policy Press at the British Society of Gerontology conference held at Brunel in July 2010. She is Editor of Ageing and Society, the leading social gerontology journal in Europe. She is a member of a range grant awarding bodies including NIHR and ESRC. She is a Fellow of the Faculty of Public Health and an Academician of the Academy of Social Sciences.  In 2017 Christina was awarded the Lifetime Achievement award of the British Society of Gerontology and awarded Fellowship of the Gerontological Society of America.